Showing posts from October, 2018
Show All 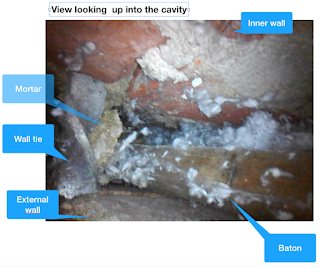 I bought a cheap Depstech endoscope from amazon. It's an impressive bit of kit for £30. The camera head is thin enough to fit though a lot of the little holes drilled in the wall for pipes and cables and heating vents. As your mobile phone is the viewing screen. Photos and videos can be taken while rummaging through a nook. For very narrow holes, there is a mirror attachment allowing you to survey the expanse of the cavity.
I tried it out on the cavity above the combustion vent in the living room. The installers had neglected to put a sleave on the vent which means the cavity is easily accessible.
A correctly insulated cavity should be difficult to see anything due to presence of dense insulation. But here there was a large void above the combustion vent. The picture below shows a reason for the void:

A long wooden baton sits in the cavity obliquely and rests against a fish tail walltie. The baton has probably fallen into the cavity when the roof was constructed.  The narrow cav…
Post a comment
Read more 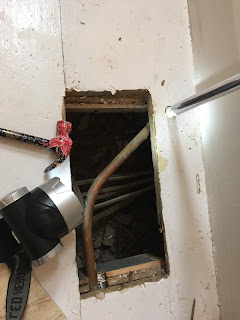 It has been a month and a half since I asked CIGA to explain why they thought arbitration was an acceptable option given that they had done a completely inadequate technical assessment.
In a previous blog I had documented that the problem cavity was narrower in places than the 50mm mandated by building control and the BAA certificate.
The technical manager at CIGA visited and did nothing but take photos of the building and try to verify the cavity depth. Initially he borrowed my tiny flexible measuring tape (which of course bends and so over estimates the cavity depth) and then tried to hook it on to the edge of the brick in the hole to get the size of the brick.
In another spot he used a drill bit and his thumb and subtracted the brick that he measured earlier and in both instances came up with a figure of 55mm.
I told him I didn't trust his methods as they didn't match up with my own when measuring the imperial brick which confirmed a standard imperial brick size of 110mm in…
Post a comment
Read more
More posts